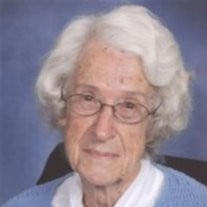 Miss Virginia Inez Bailey born February 5, 1920 in Norfolk, VA to the late Charles S. and Willie Price Nofsinger Bailey, died August 24, 2013. She had two brothers who preceded her in death, Arnold Bryan and Ralph Reginald Bailey. She is survived by two nieces and three nephews. Virginia graduated from Ferrum Junior College as Valedictorian of her class in 1941. She then continued her education at the State Teachers College in Radford, VA and graduated in 1943 with a degree in Secondary Math. Visitation will be 6:30 PM to 7:00 PM, Tuesday, August 27, 2013 at Forest Hills Funeral Homes Young and Prill Chapel with a Commemorative Service of Jenny's life to begin at 7:00 PM. Interment will be in Lakeside Memory Gardens of Eustis, FL with graveside rites at 1 PM, Wednesday, August 28, 2013, officiated by Rev. Stanley Wade, Pastor of the Eustis Nazarene Church and who had been one of Virginia's Sunday School Boys.. She moved from Martinsville, VA with her parents in 1957 to Tavares, FL. She and her family attended the Eustis Nazarene Church where she became active as pianist and Sunday School Teacher. She had lived the last few years under the care of Wanda and Harold Martin, who were friends since those days in the 60's while attending the same Nazarene Church in Eustis. She and her father, after the death of her mother in 1976, had relocated to Lake Worth. She continued living in Lake Worth after the passing of her father in 1985. Keeping in touch through the years, she was very concerned about her later future years. The Martins told her they would be willing to see to her and with great joy she moved to Hobe Sound. Her family had entertained Rev. Percy Trueblood in their home many times in Virginia and when they knew he was a Camp Meeting speaker here, they would come at least one day. She first moved to Apartment 1 on Beulah Lane Apartments and was very happy. Many times after attending a program or service she could see young people involved she'd say, "I'm going to send my kids here." She loved the services and all activities until March of this year, when after a hospital stay, she became a bed patient needing constant care. She leaves a great testimony and is now in the arms of Jesus who will show her Heaven's Glories and reunite her with her Mom and Dad whom she treasured on earth. Good bye for now Jenny, but we will see you in the Morning Just Inside the Eastern Gate. Wanda and Harold

The family of Virginia I Bailey created this Life Tributes page to make it easy to share your memories.

Send flowers to the Bailey family.