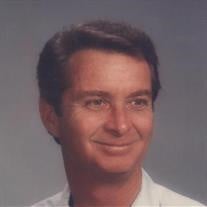 Russell Raehn Davis, 76, of Eustis Florida, died peacefully on Tuesday October 27, 2015 at his home, of natural causes. Raehn was born December 18, 1939, in Eustis, Florida to Julian and Viola Davis. He attended Eustis High School, class of 1957 and served in the United States Navy on the USS Greenlet from 1957-1960. He continued his education at Daytona State College graduating in 1963 with a degree in Electronics. Raehn was a loving husband and father who enjoyed many things in life, he was an electronic engineer and worked on the Apollo space missions and the Star Wars Project. He was also a rancher, jeweler and silver smith. He is survived by his wife Wendy Kathleen Davis of Eustis, Florida; daughters and their spouses, Amy Davis, Julie Anne Davis of Jacksonville, Florida, Crystal and Ronald Czyscon of Cape Coral, Florida and Tiffani Davis and David Allbritton of Brooklyn, New York. Granddaughters Ashley, Meghan, Tierney, Maeve, Rose, and Lily and grandsons Raehn and Robin. He was preceded in death by his parents Julian and Viola Davis. Please send memorials to Cornerstone Hospice, 2445 Lane Park Road, Tavares, FL 32778. A celebration of life will be held on Wednesday, March 23, 2016, at 2 PM in the Hamlin & Hilbish Chapel, committal services with Navy Military Honors will follow in Lakeside Memory Gardens, Eustis

The family of RUSSELL RAEHN DAVIS created this Life Tributes page to make it easy to share your memories.

Send flowers to the DAVIS family.