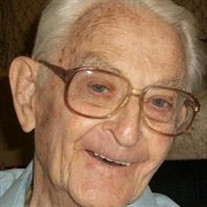 Harlan Fisher, 95, of Mount Dora, FL went to be with his Lord on Thursday night, March 24th while in the arms of his wife of 71 years, Dorothy. Harlan was born on March 9, 1921 in Lola, Kentucky to George Fisher and Grace Malcolm-Fisher and married the love of his life, Dorothy Lucille Bebout on October 28, 1944 in Marion, KY. Harlan gave his life to the Lord in 1954 – faithfully serving him ever since. He was an average man trying to make an honest living for the family that he loved. He cared about everyone and was known for his ability to make people laugh, speak encouragement, and lend support. He had tremendous work ethic and truly led by example. When he was very young, Harlan was afflicted with polio. Ultimately he survived but it left him crippled and unable to serve in World War II. Instead he contributed to the service by working on LST ships in Evansville, IN. Following the war, Harlan went on to a successful career as an auto mechanic with Fisher’s Auto Service which he owned and operated in Evansville until retiring in 1985. Shortly after retirement, Harlan and Dorothy relocated from Evansville, Indiana to Mount Dora, Florida. He is survived by his wife Dorothy, daughter Sharon Fisher-Exum (Ron) of Tavares, FL, son Gary Fisher (Dena) of Newburgh, IN, sister Anna Mae Croft of Bloomington, IN, grandson Bryan Harper of Minneapolis, MN, granddaughter Kristy Harper of Tavares, FL, grandson Eric Fisher (Mari) of Newburgh, IN, four great-grandchildren Austin, Zach, Ethan, and Clara along with many nieces, nephews, and cousins. He was preceded in death by brothers George, John, and Phil. A memorial service and celebration of Harlan’s life will be held on Saturday, April 2nd at 2 pm at Lighthouse Baptist Church in Eustis, FL. His interment at Lakeside Cemetery in Eustis will be private for immediate family. In lieu of flowers, Harlan and Dorothy ask that memorial donations be made to Cornerstone Hospice, 2445 Lane Park Road, Tavares, FL 32778, as the Hospice in-home service made the final months much more comfortable.

Harlan Fisher, 95, of Mount Dora, FL went to be with his Lord on Thursday night, March 24th while in the arms of his wife of 71 years, Dorothy. Harlan was born on March 9, 1921 in Lola, Kentucky to George Fisher and Grace Malcolm-Fisher and... View Obituary & Service Information

The family of Harlan Fisher created this Life Tributes page to make it easy to share your memories.

Send flowers to the Fisher family.