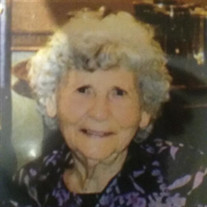 Esther Mae White Gammenthaler, passed away in Mount Dora, Florida August 15, 2019, after a very productive and unselfish life of 96 years, She was preceded in death by her husband of 63 years, Charles Arnold Gammenthaler and by her youngest... View Obituary & Service Information

The family of Esther Mae Gammenthaler created this Life Tributes page to make it easy to share your memories.

Send flowers to the Gammenthaler family.