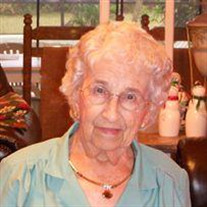 Dorothy “Dot” Mae Wolf (1914-2015), of Tavares, Florida, peacefully passed away at her home early Sunday morning, August 16, 2015, after a brief illness. She was 101. Dot was born May 18, 1914 to Cyrus William and Alta Mae DeLauder Kershner. Dot was born on a farm near Hagerstown, Maryland. In her teenage years, she lived in Williamsport, Maryland on a farm owned by her grandfather Millard Kershner. The reason she moved to the farm with her grandparents was to allow her to finish high school. Her Aunt Suzie was a teacher at Williamsport High School who took Dot to school every day until she graduated in 1932. The house on the farm is the most photographed and best known home in Washington County, Maryland. Rose Hill was part of a 210-acre working farm, and the house, which was built in 1806, has been placed on the National Register of Historic Places. Rose Hill remained in the Kershner family until 1951. In 1933, Dot married Bruce E. Wolf, who preceded her in death in 1989. They were married for 56 years. They later moved from Chambersburg, Pennsylvania and settled in Tavares, Florida in 1967. Dot was a homemaker and devoted wife and was also predeceased by her parents; brother, Millard Kershner of Altamonte Springs; sisters, Jean Carbaugh of Tavares and Fern Zito of Altamonte Springs. She had a heart of gold, a spirit that was contagious and a light that brightened the life of anyone that was lucky enough to know her. Those that she left behind will forever cherish her memory and the joy she brought to everyone she met. She is survived by 5 nephews, M.F. Kershner (Fran) Houston; R. Bruce Kershner (Julie) Lake Mary; Robert L. Kershner (Trish), Orlando; Ray Gary Breeden, Green Cove Springs; and Daryl Carbaugh, Grand Island; 3 nieces Nancy J. McNeill (Michael) Umatilla; Donna C. Baab (Jim), Umatilla; and Dottie Cullen, Grand Island; 8 great nieces; 3 great nephews; and 7 great, great nieces and 5 great, great nephews. A Graveside Service will be held on Saturday, September 12, 2015 at 10:00AM at Lakeside Memory Gardens, Eustis, FL. In lieu of flowers, memorial contributions may be made to Audubon Florida, www.fl.audubon.org. Arrangements have been entrusted to Steverson, Hamlin & Hilbish Funerals and Cremations, 226 E. Burleigh Blvd., Tavares, FL 32778, (352)343-4444. Online condolences may be left on the Tribute Wall.

The family of Dorothy Mae Wolf created this Life Tributes page to make it easy to share your memories.

Send flowers to the Wolf family.