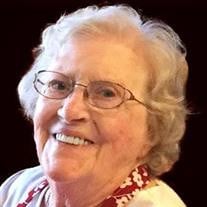 Charlotte G. Clifton (born Charlotte G. Fischer) of Oviedo, Florida and Mount Dora Florida, 93 years of age, passed away on May 17, 2017 of natural causes. Much of her family was by her side. Charlotte was born in Bismarck, North Dakota, on January 10, 1924 to the late Anna Katherine and Anthony John Fischer. She graduated from St. Mary’s High School and lived in Bismarck while working on her secretarial certificate prior to following her family to Portland, Oregon. She married the late Buel Clifton on April 6, 1945 and lived in Portland before moving to California and a few years later to the east coast. They lived in Maywood, New Jersey, Bethesda, Maryland and Barrington, Illinois before retiring to the Hill Country of Llano Texas. After 20 years they finally relocated to Waterman Village in Mount Dora. Charlotte moved to Oviedo, Florida to live with her daughter Trish Wiltshire after Buel passed away on April, 2016. Charlotte was passionate about her family, always supportive of her eight children and husband. She always insured they had the means to pursue their interests and worked tirelessly to provide a good family environment. She loved to cook, garden and dance, learned to tailor-make her own clothing, repair appliances, hang wallpaper, grow prize winning dahlias and roses. She worked on beautiful ceramics and knitted. If she did not know how to do something, she made it her job to learn. She was a giving and caring person to everyone she met. Charlotte had a deep faith, was a member of the St. Patrick’s Catholic Church in Mount Dora and daily prayed for many. After 72 years of marriage Charlotte and Buel still held hands and kissed goodnight. Charlotte is survived by all eight of her children: Guy D. Clifton, of Denver, Co; Sandy Kay of Halfmoon Bay, BC, Canada; Karen Erickson of Howie in the Hills, Fl; Rita McBride of Canton, Georgia; Mary Clifton of Fort Collins, Co; Greg Clifton of Telluride, Co; Brian Clifton of Austin, Texas; Patricia Wiltshire of Oviedo, Fl. She is also survived by 15 grandchildren and 8 great-grandchildren. A funeral mass will be held at St. Patrick’s Catholic Church on June 13 at 10:30 a.m. A private ceremony will take place afterwards for family only.

Charlotte G. Clifton (born Charlotte G. Fischer) of Oviedo, Florida and Mount Dora Florida, 93 years of age, passed away on May 17, 2017 of natural causes. Much of her family was by her side. Charlotte was born in Bismarck, North Dakota, on... View Obituary & Service Information

The family of Charlotte Clifton created this Life Tributes page to make it easy to share your memories.

Send flowers to the Clifton family.