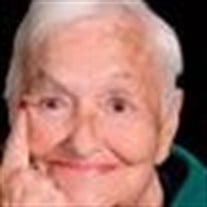 Angeline Pohlman, 92, of Mt. Dora passed away on Sunday, August 31, 2014. She was born on her family farm in Roswell, Ohio on November 21, 1921. She married Robert Pohlman in 1941. They moved to Mt. Dora in 1951. She was a member of the First United Methodist Church of Mt. Dora. Angeline is preceded in death by her parents, Pietro and Olivia D'Agostini, her husband of 50 years, Robert, and her sister Dana Visnick. She is survived by her daughters, Betty (John) Snowberger, Eustis, Linda (Hans) Kober, Snellville, GA, Janet (Jeff) Durden, Lake Mary, FL, Mary (Bill) DeMent, Orlando, FL, nine grandchildren, six great-grandchildren, two nieces, and one nephew. A graveside service will be held at 11 a.m. on thursday, September 4, 2014 at Lakeside Memory Gardens.

The family of Angeline Angie Pohlman created this Life Tributes page to make it easy to share your memories.

Angeline Pohlman, 92, of Mt. Dora passed away on Sunday, August...

Send flowers to the Pohlman family.