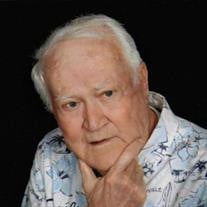 Aden Andrew Bushée 88, of Leesburg, FL went to be with the Lord on Friday, June 23, 2017. Aden was born on August 07, 1928 in Philadelphia, PA to the late Aden and Mary Bushée. Aden moved to Leesburg, FL in 1994 from Keyser, WV. He was an active member of St. Mary of The Lakes Catholic Church, Eustis, FL. Aden enjoyed working around his home and loved the outdoors. He worked in Telecommunications as a telephone repair man from November 4, 1944 and retired on December 31, 1992. Aden worked for AT&T and its related companies with 39 years of perfect attendance. In 2003 in Eustis, FL Aden married the love of his life: Sharon “VanHese” Bushée. Aden was a good man with a gentle spirit who will be deeply missed by many. He is predeceased by his Son: James H. Bushée; Stepson: John Bodman; Sister: Jane Shomo; and Brothers: Charles and William Bushée. He is survived by his loving wife of 14 years: Sharon Bushée, of Leesburg, FL; Sons: Gerald Bushée, of VA, and Thomas Bushée, of WV; Brother: John (Audrey) Bushée, of MD; Sister: Nancy Alsing; Grandsons: Justin and Eric Bushée, and John and Justin Bodman; Great-Grandson: Christopher Bodman; and several Nieces and Nephews. Services were entrusted to Steverson Hamlin Hilbiah, Tavares, FL. Graveside service will be Lakeside Memory Gardens, Eustis, FL Friday, July 7, 2017 at 11:00AM

The family of Aden Andrew Bushee created this Life Tributes page to make it easy to share your memories.

Send flowers to the Bushee family.